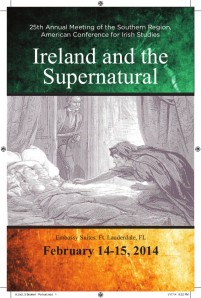 Ireland and the Supernatural is this year’s conference theme for the 25th Annual Meeting of the American Conference for Irish Studies held February 14-15 at the Embassy Suites, Fort Lauderdale, Florida. The Roaring Kelly Band will be there.  We’re not supernatural but we’re proud to provide traditional Irish music on Valentine’s Day, February 14, for the Manager’s Reception and later that same evening at, for the dramatic reading of the Irish Dracula, written by James E. Doan, Ph.D., Nova Southeastern University. We’ll set the mood while talented actors drive the drama. Here’s the synopsis:

Set in 1888, in London and Co. Sligo, Ireland, The Irish Dracula deals with the Irish author/theatre manager, Bram Stoker, and the imperious actor/director Henry Irving of the Lyceum Theatre for whom Bram works. The remaining characters are adapted from those found in Dracula. Seán Haircéar, the fiancé of Bram’s typist, Mina Murray, is en route to Markree Castle in Ireland to deliver a deed for a London house to the mysterious Lord Edward Cooper. Also featured are the ageing diva, Lucilla Desmond, her suitor, Dr. John Seward, and the Irish servant, Tadhg.