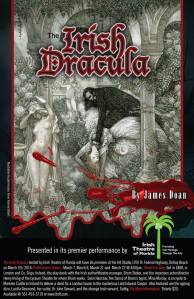 The Irish Dracula, hosted by the Irish Theatre of Florida, will have its premiere at the new Art Studio, 1201 N. Federal Highway, Delray Beach on Friday, March 7, 8, 21, and 22 at 8:00pm.  The play is set in 1888, in London and Co. Sligo, Ireland. The year 1888 marked the 40th anniversary of one of the worst years of the Irish Famine, when over two million Irish men, women, and children died – about a quarter of the population of Ireland – while many others were forced to emigrate.  This close of the 1800’s was also marked by political disturbances that later lead to Irish independence 30 years later.

The play deals with the Irish author/theatre manager, Bram Stoker, and the imperious actor/director Henry Irving of the Lyceum Theatre for whom Bram works.  Sean Haircear, the finacé of Bram’s typist, Mina Murray, is en route to Markree Castle in Ireland to deliver a deed for a London to the mysterious Lord Edward Cooper.  Also featured are the ageing diva, Lucilla Desmond, her suitor, Dr. John Seward, and the strange Irish servand, Tadhg.

The Roaring Kelly Band provides traditional Irish tunes for the overture and throughout the play to set the highs and lows for this Gothic melodrama.