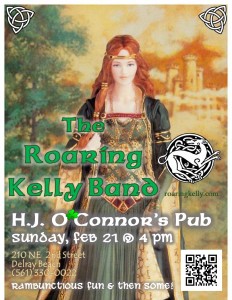 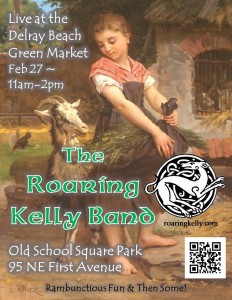 The Roaring Kelly Band raises the roof for HJ O’Connor’s Sunday Happy Hour this February 21, at 4pm. You heard right. Football season is done so we’re making Sunday the Funday. We’re gearing up and holding a ‘Train-Yer-Liver’ Boot Camp with hard-driving reels, vicious jigs, jumping hornpipes, lilting waltzes, and enchanting airs as well as traditional ballads, songs of hard fought Irish independence. And if that isn’t enough for you, there’s the following Saturday, February 27, at the Delray Beach Green Market where we’ll start at 11am keeping things lively for all those folks who enjoy fresh vegetables, baked goodies, sassy music, and rowdy ditties.  After that, it’s only a short while until we’re looking square at the BIG DAY to celebrate Ireland’s patron saint.
As for good Saint Patrick, I have a fascinating story to tell.
While staying in Sligo last August for the All Ireland Fleadh Cheoil, I was fortunate enough to see the brilliant band Danú perform at the Hawk’s Well Theater. During the break, while ordering my Guinness at the lobby bar, I asked about the name, Hawk’s Well. One of bartenders told me it was the name of a famous play by Sligo’s native son, poet, playwright, and Nobel prize winner, William Butler Yeats. That Yeats’ play was the first play in English based on Japanese Noh theater. It was then that, another bartender piped in saying “That may be so but the truth of it has more to do with St. Patrick and the fire-spitting demon he drove out of Ireland with the snakes.”
“Well then,” says I, “that’s got to be some legend,” but before I could get more details, the crowd thickened and the barkeeps were kept too busy to pay any more attention to me.
Because next month is the big day when Ireland’s patron saint is celebrated, I present to you here, the legend of Caorthannach, (pronounced kwee-er-HAH-nuk) thought by some to be the devil’s mother, who was chased by St. Patrick when he banished the snakes out of Ireland.
Saint Patrick is said to have stood on the mountain now known as Crough Patrick in County Mayo, and expelled all the serpents out of the Emerald Isle into the sea to drown. One monster, however, managed to escape – Caorthannach, the fire-spitter. The crafty she-demon slid down the back-side of the mountain and away from the Saint. Patrick spotted the demon then called for the fastest horse in Ireland, mounted up and gave chase.
The pursuit was a long one, and Caorthannach knew St. Patrick would need water to quench his thirst. Along the way, she spit fire as she fled, and poisoned every well she passed. When Saint Patrick reached Tullaghan in County Sligo, he was overcome with thirst and prayed for water. It was then that Saint Patrick’s horse stumbled on Carraig-an-Seabhach (Hawk’s Rock), and the good Saint was thrown to the ground. As he fell his hand and back struck a stone. Immediately, a well of water sprung forth and Saint Patrick was able to quench his mighty thirst. As the demon approached, Saint Patrick sprang out from behind the rock and banished the fire-spitter with one word. Caorthannach was thrown many miles away into the Atlantic Ocean and drowned. The swell that rose in the far off ocean as the demon perished created a flow in the well. Ever since, the water in Hawks Well ebbs and flows with the tide and contains alternately fresh then saltwater as if connected to the ocean.
The Roaring Kelly Band makes the ebb and flow of a good time something special first on Sunday, February 21, at HJ O’Connor’s and then on the following Saturday, February 27, at the Green Market in Delray Beach where you can rollick at the frolic.